Integration Through Cultural Due Diligence

Given the time commitment and financial investment required during a merger or acquisition, it’s somewhat surprising the number that fail as a result of differing cultures–essentially two sides unable to find a common platform on which to move forward. Not enough attention is given to the integration of two organisations–their values, processes, and ways of communicating, which collectively define how they interact with employees as well as customers.

Thomas Kraabel, Vice President of Human Resources for Asia at Pall Filtration, discusses the importance of integration and cultural due diligence during an acquisition.

Cultural Due Diligence: the Sooner the Better

Even in the current economic climate where speed is of the essence as organisations buy-out the competition to gain greater market share, business leaders continue to invest heavily in financial and legal due diligence. Despite these investments, many acquisitions fail to achieve the desired outcomes. Thomas Kraabel, Vice President of Human Resources for Asia at Pall Filtration believes that what sets the successful deals apart from those that fail is clear — due diligence and integration that embraces the human and cultural aspects, in addition to the financial and legal factors.

Having been involved in a number of substantial acquisitions during his HR career, Kraabel is acutely aware of the link between cultural due diligence and deals that not only survive, but thrive. Reflecting on his experience, Kraabel confirms what is unfortunately widely practiced: “The deal needs to make sense financially, and HR is normally brought in later at the front end.” By the time HR gets involved, it may be too late to engage key leadership, and this important lever for integrating the organisations as seamlessly as possible from the start is lost.

One of Kraabel’s areas of focus has been key talent from an on-going integration perspective. When Ingram Micro acquired [then] significant competitor Tech Pacific a few years ago, essentially all that was bought was talent. Locking in the right talent was critical to the success of that acquisition for the purposes of continuity and intellectual property. “If the talent didn’t stay, then we would have been throwing away several hundred million dollars, so the key there was to focus on the top leadership talent, as they would have had the most influence to retain and bring over other critical talent from all levels that we wanted.” By supporting the focus on key talent with good Talent Management plans and programmes, Ingram Micro was able to ‘lock-in’ leading employees from Tech Pacific. “We had five out of the seven business leaders from Tech Pacific take over in leadership roles at Ingram Micro in Asia. It was very important for us to keep those five business leaders heavily engaged and educated on how Ingram Micro works.” When prioritised and planned well, paying careful consideration to talent pays off during integration and is critical to the overall success of the acquisition.

“Communication is a huge issue and one that more companies are doing better,” states Kraabel of his second area of focus during cultural integration. Throughout Danaher’s fairly recent acquisition of Pall Filtration, effective and on-going communication was emphasised by Kraabel and his team. They held town halls, one-on-ones, small roundtables and sent e-mail blasts regarding what was going to change and what would stay the same. There is no questioning the benefits of over-communication during a time of change and uncertainty. The result points to better-informed individuals and teams that are equipped with the knowledge to make decisions. “Most are well engaged and are looking forward to being part of a larger operating company, so it’s seen as a real positive for the team within Pall.”

Kraabel has identified four crucial roles for HR to play in any successful acquisition to support integration: 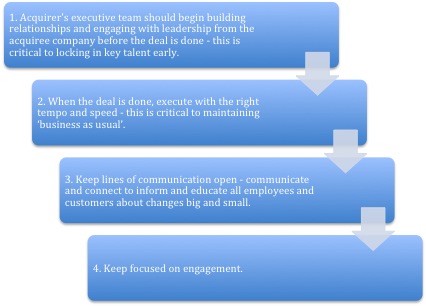 With the right planning and attention, acquisitions can result in a company that is larger than the sum of its parts, but if not well orchestrated, the results can prove costly.